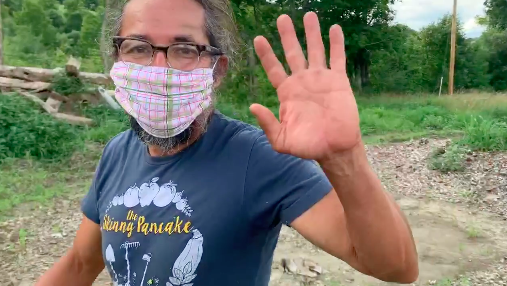 Nando Jaramillo is the Garden Mentor for the Vershire GrowTeam site. When Nando is not in the garden, he is running Moon and Stars making traditional Colombian arepas and empanadas.

Although he has a physical food cart where he makes his food, Nando considers Moon and Stars more of a community project. He started Moon and Stars to educate others about the regenerative process of growing produce, specifically heirloom corn. Originally from Colombia, and then Miami, Nando moved to Vermont three years ago. He explains how after visiting once he, “Felt really connected with the people here.” He also saw Vermont as the perfect place to grow corn and make arepas.

His mission with Moon and Stars is to foster a food system that highlights his Latin American heritage and creates a better quality of life for farmers and others who work in the food system through a local food economy. This passion made his decision to get involved in the statewide initiative, Everyone Eats, a no-brainer.

Everyone Eats, the statewide program that is rolling out across the state, provides funds to local restaurants and food producers to make meals for those experiencing food insecurity due to COVID-19. Nando saw this program as a great way to use the produce he grew at the Vershire GrowTeam site to make food for his community. He found it important to distribute his food in Vershire and Chelsea since those towns are more rural and have less access than other surrounding Upper Valley towns.

This Friday will be the first week that Nando will be at the Vershire food shelf giving out his homemade meals to community members in need through Everyone Eats.

We couldn’t think of a better use of ShiftMeals GrowTeam produce than feeding those in need!

To learn more about Moon and Stars watch the video below.